The WBR Yamaha team ran through the full range of emotions in an eventful day at round two of the Pro MX Championships held at Fairburn Park, Canberra.

The team and riders experienced some of the highs and lows in racing and all within a few hours and the racing continued to through up all kinds of challenges and triumphs for Max Purvis and Alex Larwood.

Purvis got the team off to a brilliant start when he piloted his YZ450F to the top of the time sheets in qualifying as he set the fastest lap in the 15 minute session. After racing a YZ250F in New Zealand over the summer, Purvis is coming to grips with the bigger bike and his speed proves his is headed in the right direction.

The MX1 class faced a 30 minute moto in the morning racing and then back to back sprint motos in the afternoon to determine the round winner. Purvis started the long moto around the top 10 and then got to work on the riders in front. He moved his way to sixth place and was holding the position comfortably when he miscued a section of track in the latter stages of the race and went down awkwardly. He took some time to get to his feet and regain his composure and as a result, he slipped well down the field to finally finish in 22nd place.

The back to back motos went much better for the quiet Kiwi as in each race he again assumed his position inside the top 10 and moved forward. He was able to put together a 6-6 result in the back to back races and do battle with the big names in Australian motocross.

“Definitely some highs and lows for me today and shows the importance of consistency when racing at this level,” Purvis begins. “I had the speed today for a top five overall finish and I’m disappointed that I didn’t get it done but at the same time, I was in the race and right there with the good guys which is where I want and need to be.

“The crash was my fault and ruined what could have been a great day. I will learn from it as do my best to eliminate as many mistakes as I can and be consistent in each and every race.

“The fastest time in qualifying was a bit of a surprise as I haven’t raced here before so to get a lap in like that was pretty cool. The next step is to transfer that speed into every race and get closer to the front every time I’m on the track.”

And the emotions kept flowing in the MX2 class where Alex Larwood was looking to continue his glorious start to the season. He started moto one in a good position but then came together with another rider that saw him lose valuable positions and points. By the time he re-joined the race and charged to the finish line, the best he could manage was a 14th place.

Race two saw several battles within the top eight riders and Larwood was doing his best to move forward. His speed was carrying him towards the top three when he another rider came together with Larwood falling from his bike, landing heavily on his shoulder and head.

He got to his feet but instantly felt pain in his shoulder and signaled to the medical crew for assistance. He was unable to finish the race as the RACESAFE team worked on his dislocated right shoulder.

The shoulder was put back in place and he now need scans to determine the extend of the injury and what rehab is required.

“As soon as I landed I felt my shoulder come out. I have had issues with it before, so I know that feeling,” said a dejected Larwood. “They got it back in but now it’s a matter of finding out what damage is done and how fast I can get back on track.

“The Adelaide round is next and I will do everything I can to be at the start line. It’s a track I have had plenty of success on in the past and I really want to race in front of my friends and family back home in SA. 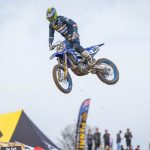 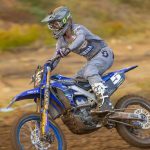 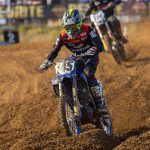 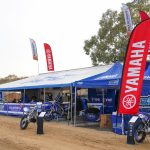 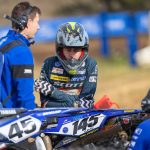 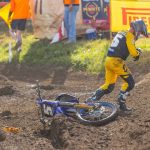